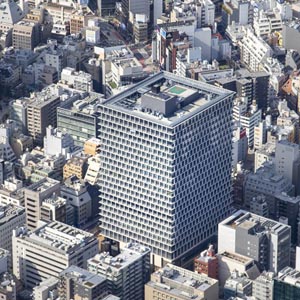 Kanda Square is located within the Kanda district, to the north of the Imperial Palace and Otemachi—Tokyo’s foremost business district—and to the west of anime and manga subculture epicenter Akihabara. During the Edo period from 1603 to 1867, this district was one where neighborhoods of plasterers, dyers, and other artisans mingled with samurai residential compounds. To this day, the compact neighborhoods and alleyways of the area, with places to work and live in close proximity, holds many fascinating attractions. The goal for the project was to address local issues and aim for a structure that embodies Kanda’s history and spirit via a design concept that captures the iki aesthetic—a complex sense of spirit and style, sense of space, and ethic of craftsmanship that is part of the daily lives of residents.

To stand out among the other high-rises of Otemachi, a distinctive design was sought for the building. The four sides of the tower share the same design, easily recognizable from anywhere nearby. The façade covering most of the building functions as a brise-soleil, blocking about 70 percent of direct sunlight at the spring and autumn equinoxes. It also significantly reduces solar heat gain and cuts primary energy consumption by 25 percent. The vertical eaves feature triangular ribs designed optimally for the sun angle and for the direction and surface of the exterior. Similarly, the tops of the horizontal eaves were designed to optimize the amount of sunlight for a glare-free working environment, factoring in the sun’s angles between spring and fall.

To promote movement and commercial activity, the lower part of the building was structured differently than the rest to create open spaces that connect seamlessly with the surroundings. The official entrance for the building’s office space is located on the second floor, but the lowermost standard office floor is about 100 feet (30 meters) above ground, roughly as high as the penthouse floors of nearby buildings. Between the ground level and the beginning of the office floors are the base isolation layer, a hall, rental conference rooms, and the electricity and other control rooms, which were arranged in consideration of the four adjacent streets, access routes for building functions, and sound insulation.

With regard to sustainability, planning was geared to ensure alleviation of environmental load during construction by minimizing the area excavated and the need for disposal of rubble, scrap metal, and soil; establishing the base isolation layer between the first and second floors of the new complex; and minimizing the basement floor. A cloud-enabled BECMS is interconnected with the BEMS of other nearby buildings from the central monitoring room to collectively manage the data and provide optimal area management for decarbonization.